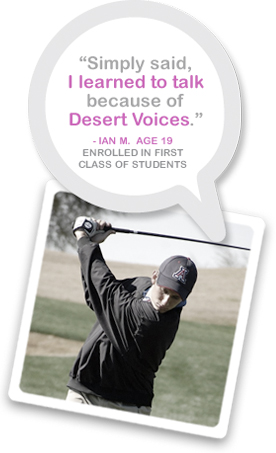 What they’re saying about us...

"It has been a few years since Charesse was that tiny little girl taking the big adventure out into public school! She just graduated from high school, as a member of the "National Honor Society” with high honors. She received a Provost academic scholarship to ASU. She is a pole vaulter and took third in State last year in that sport. She loves to play the piano and plays for our church choir. All around, she hasn't let being hard of hearing stop her from doing anything she chose to do.

Her success really did start at Desert Voices. When we first identified her hearing loss, we communicated with the public schools out here but the school district was so small that they had never had a hard of hearing student before. Their suggestions for education were appalling, simply due to a lack of awareness. We fought an emotional battle and eventually had an amazing team of educators who supported our request for her to attend Desert Voices. Charesse went from a severe language delay to being ready for public school in one year. She was isolated and afraid of public settings when she started at Desert Voices but with the astounding teachers and great curriculum, her confidence and skills sky-rocketed. Since being in public school, she has required very little additional help and teachers just stood back and watched as she embraced learning."

"Not knowing anything about hear loss when Madison was diagnosed we were devastated at the thought of having a child with a disability. The staff at Desert Voices taught us that having a hearing loss didn’t have to be a disability DV and its passionate staff have given Madison a voice and in the process also the gift of being able to grow up as a normal kid having a normal life."

"Madden is three years old. He was misdiagnosed at birth. His parents noticed that he wasn’t achieving certain milestones and he was finally diagnosed with severe to bilateral hearing loss at 10 months old. His mother found out about DV and he started just after his first birthday. He has two cochlear implants, and has had four surgeries in the last two years. He’s a brave little boy who is doing well in his first year in Early Intervention. His mom said “I am thankful every day to have Desert Voices. I don’t know what we’d be doing or where Madden would be without this school. His mom drives to DV from Lake Havasu every week so Madden can attend school. They stay in a hotel for two nights and have for a year. Next year he goes three days a week."